I swear this is a book review, just give me a little leeway.

Whenever my kids want to pretend we’re all baseball players, they ask me what I am. Am I a first baseman? A catcher? I always say I’m a relief pitcher.

“I’m pretty good, but not a big name. Some years I’m really valuable; some years I get shelled. I move around every few seasons.”

I figure it’s more realistic. I’m not a very good athlete, but I’m a crafty, creative son of a bitch when it comes to competition. And hell, I’d still be making a few million a year.

In all honesty, as much as I love baseball, I never dream of being a ball player. But right now I’m about halfway through “The Glory of Their Times” by Lawrence A Ritter. 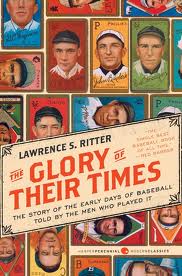 Ritter wrote this book in the 60s. Ty Cobb died, and Ritter realized that all this history of the game was going to be gone soon. So he spent years tracking down ballplayers from the 1890s through the 1920s. In shacks, in nursing homes…he taped long interviews with them as they reminisced about their careers. Each chapter is another ball player telling their story.

Holy moly the lives these guys lived. They would hop trains or ride around in a covered wagon, sleeping in barns or just out under the stars. They’d go from town to town playing other teams and make their living that way (barely). They’d get discovered by chance, usually.  And then when they got to the majors they were in these dramatic, legendary games that were outrageously exciting. The adventures these guys had – they were like samurais wandering the landscape.

Now THAT sound like a glamorous life to me. Not glamour in the Kardashian-esque way today’s baseball players live, but glamorous in an adventurous, colorful, living-large way. That’s a ball player I’d like to be.

This is a terrific book. Even if you’re not a baseball fan, you’d like it. It’s about history and great stories – not about stars. And in every chapter you can hear these guys voices in your head. What a project and what a great book.

So in conclusion, I would like to be a ballplayer in the 1890s-1920s. All I need is a machine that lets me travel back in time and another machine that makes me good at sports. Let me know if you can help with either of these things.

1 thought on “Book Review: The Glory of Their Times”