I was explaining to Jack where I got the tickets.

“They’re from a guy I used to work with named Andrew. He’s a real-deal baseball fan.”

“Not more than me,” Jack replied.

“He has a baseball bat autographed by 23 Hall of Fame baseball players.”

Jack frowned at that. He takes pride in being the biggest baseball fan on earth. He didn’t have a comeback to that bat.

Either way, we had 4 tickets to the Phillies-Red Sox game. As luck would have it, my in-laws were in town, so it was me, Jack, Alex, and Pop-Pop (my father-in-law — hereafter referred to as “Dad”). Boys trip to the Phils. We climbed in the car and headed for Philly.

We parked and walked to the stadium, got in and just made it for the first pitch. The seats were spectacular – first base side, 12 rows off the field. Perfect. Or so I thought. Turns out, we had some issues.

It was hot as holy hell. 96 and muggy. Worse off, the sun was absolutely blasting us in the face, which made it tough to see the game. Jack was behind two tall guys, so he kept standing up to see, which was annoying the hell out of the people behind him.

As for the game, each team was starting a rookie pitcher. That meant there would be lots of hits and lots of walks. We were in for a long night.

At the top of the 2nd, I looked over at Alex. The boy appeared dazed. As I looked him over, I thought about what he’d done that day… 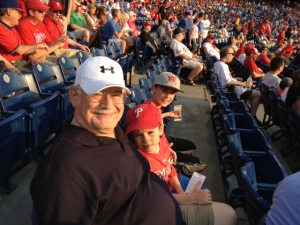 He’d had a school field trip where they hiked around a pond searching for bugs. This was 4 hours in the hot sun. From there he’d gone to a swim practice where he’d done laps for 90 minutes. Shani had rushed him home, put him into a Phillies shirt, handed him a slice of pizza, and threw him in the car for the game.

Alex plodded slowly behind Jack and I as we climbed the steps up to the concession area. We got into a slow moving line. Alex was flopping against me. He leaned his face up at me and said:

Oh boy. Now we had a situation on our hands. Alex vs Jack. I totally understood where Alex was coming from. He’s hot, he’s bored, he can’t even see the damn game. And we’ve got 2+ hours to go. On the flip side, I’ve got Jack, who will throw an absolute shit-fit if we even suggest leaving early. My only way out was a spending spree to keep Alex entertained, which is brutal on the wallet.

“Excuse me, are they with you?” A man had come up behind me.

“Here.” The man handed me 6 tickets. “They’re concession vouchers. I can’t use them. Buy them some ice cream.”

“Wha…thanks!” He was gone. I looked down into my hand: I was looking at $30 in vouchers.

“Boys!” I shouted. “The baseball gods are with us!”

Lo and behold, they were. The boys each got Gatorade, I bought myself a beer, and I got a water for my dad. We went back to our seats. Alex sat on my lap and slurped down his blue liquid, perking up as he got re-hydrated. The sun sunk below the stadium wall so we could stop squinting. The temperature dropped.

A friend in Jack’s class called down to us. He was 6 rows behind us watching the game with his dad. The seats next to us were free and we invited them down to join us. In the 6th inning I took the boys to buy ice cream with the rest of the vouchers. By the 7th inning the Phils were down 7-2 and the stands were thinning out. The 3 boys scooted down to the front row. They spent the next half hour begging the ball girl to give them the next foul ball (that never happened).

My dad and I spent the rest of the game side-by-side. We could easily keep an eye on the boys and still focus on watching baseball. We were both too big for the chairs and our shoulders were mushed together. We watched every pitch and shared a running commentary on what we saw.

In the 9th inning they put up the “Flex Cam”. Jack began flexing his muscles for the crowd and suddenly there he was on the big screen.

“It’s Jack!” my dad spat out, leaping out of his chair and thoroughly mushing me in his enthusiasm and shock.

When the game finally ended, the boys rushed across the rows to the Phillies dugout in hopes of getting autographs. An old lady usher promptly shooed them away after making Jack tie his shoelaces.

So we headed out. The four of us walked together back to the car. The parking lot exit fed us directly out onto the Walt Whitman Bridge headed east. With sleepy boys in the back seat, we headed back to Jersey.

[Part 2 of 4 coming tomorrow(ish), where I’ll actually focus a bit on the game.]