For the record, this has been the single toughest blog post I’ve written. This wedding was over a week ago and I’ve tried literally 3 different ways to capture this event. None of them have been any good. The obvious challenge is that this is a blog about baseball and this wedding had no baseball, but that’s actually a pretty minor concern. The post finally came together when I realized what I really had to write.

This is not a blog post – this is an apology.

Shani’s cousin Leah was getting married. The entire weekend was at a farmhouse, complete with the following agenda:

See where I’m coming from with the whole hippie thing? But that’s not what had me worried. I came in with a lot of preconceptions. I’m 42 and I’m on the cusp of the “old crowd” who attend a wedding. I am not part of the young people in their mid 20s who are the friends of the bride and groom. The past few weddings I’ve been to I’ve observed the younger crowd drinking their faces off, running out for cigarette breaks, and generally being caught up in their own drama. I expected this to be the case at Leah’s wedding. Because of this I expected that they would suck at Frisbee, I expected that Shani’s mom would end up doing all the dishes at the communal meals, and I expected the talent show to be a disaster for my boys.

Alex was planning to do gymnastics and Jack wanted to do breakdancing. I was pretty sure the crowd was NOT going to be interested in some kids doing their dumb acts. I saw my boys being embarrassed and out of place.

For this reason and more: I would like to formally apologize to Leah, to Dan, and to all their Jewish hippie friends. Because the talent show and the entire weekend was absolutely terrific – and most importantly, so was the crowd. 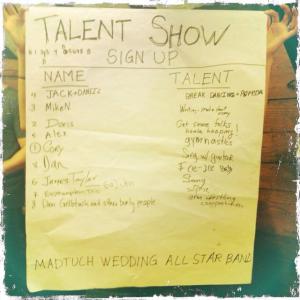 This was a hilariously fun group with a chaotic band jamming in between acts. A great time and a great start to what would turn out to be a pretty unforgettable weekend for my boys. (Please take note that Dan, the groom, performed “Ice Ice Baby”. Oh, also note that James Taylor signed up to sing. This was a moment of pure comic genius by my father-in-law that caused confusion throughout the entire show.)

Alex led off his gymnastics routine with a handspring. Huge applause. He arched into a backbend and then kicked up and onto his feet. Bigger applause. Then he closed it by dropping into a split. Standing ovation.

A few acts later, Aunt Doris called for a hoola-hoop volunteer and Alex sprang onto the stage.

After dinner Alex and Shani took a shift doing dishes. Shani was soon relieved by one of Leah’s friends. Alex stayed on and worked through entire job, cycling through at least a dozen people who took turns helping out.

Over the course of the pre-wedding festivities, the wedding, dinner, and the reception, Alex drank 75 glasses of coke. A few times he managed to put a fist full of red Swedish fish into his coke, so when he finished the drink he would pick out the sticky fish.

Alex wore his bright green yarmulke in the car on the ride home. He wore it at breakfast the next morning and then wore it to school. 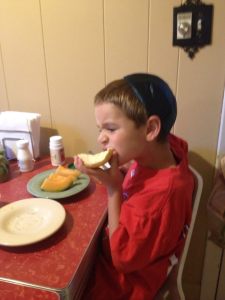 Jack is not a professional breakdancer. He flops around on the floor twisting in short circles. However, he was joined on stage by Leah’s brother, Daniel, who actually took “pop and lock” lessons for years. Daniel’s really good at it. But the minute they started the crowd screamed in delight. They went wild when Jack dropped and started his spinning-kick moves. Then Jack popped up, reached into his pocket, and showered the crowd with fair-trade chocolates.

Jack played Frisbee with hippies and organized the kickball game.

Leah asked him to hand out programs at the wedding. Jack did not hand out programs in wedding style – he did it baseball style. “Programs! Who needs a program?” he cried as he walked the aisles before the ceremony started.

After dinner, when the band played, Jack took the dance floor in full force. The crowd formed a ring and Jack leapt into the center, flopping wildly with his best breakdance moves.

“Your boys are just amazing!” one of Leah’s friends came up to me and said as Jack danced.

“I just can’t believe how much self confidence he has! It’s just incredible!”

And finally…after the wedding was over…there was baseball. Sweet baseball. Jack and Alex got back to the hotel, showered, got into pajamas, and then ran barefoot through the hotel hallways to their grandparent’s room. Cardinals were on that night. My freshly-showered boys snuggled up on the bed with their Grandma and Pop-Pop to watch some baseball.

I am here to report that Leah and Dan’s friends were the nicest collection of people I’ve come across in years. They loved Dan. They loved Leah. They loved that they were being married. They were all there with nothing but joy and it was a pleasure to spend the weekend celebrating with them.

Here are some photos 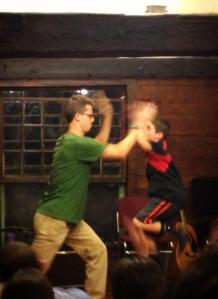 Alex and Aunt Doris (mother of the bride) hoola-hooping: 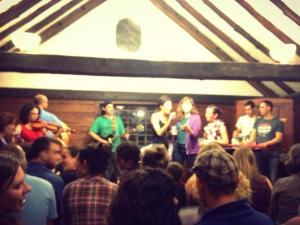 Three photos of Leah. I love how remarkably happy Leah looks in all of these shots. She looked like that the entire weekend. Dan, the lucky groom, is the guy with her in the first photo. 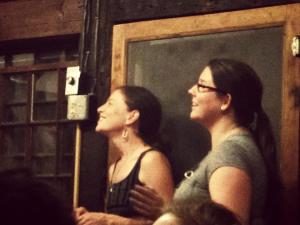 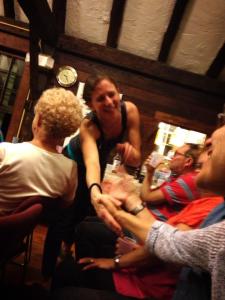 11 thoughts on “Jewish Hippies and Breakdancing”