PING! went the sound of the aluminum bat. A hard grounder between the first and second basemen. And before anyone could even take in the fact that Jack had made contact for the first time this season, Jack Nuckols was standing on first base.

I will tell you, the boy’s smile was something to behold. It was one of those smiles that pushes out uncontrollably and makes your face tremble with the effort of holding it.

I did not get a video or a photo. It happened too quick and I was too busy experiencing it to record it.

However…I did mange to track down Alex, who was wandering with the pack of younger siblings. A bunch of little girls were busy throwing each other’s shoes over the fence and then having Alex scale the fence to retrieve them. I was able to record Alex’ reaction:

So at long last, Jack Nuckols has a hit. Also of note, he swung and connected on his next at bat. It was a pop out, but perhaps this monkey is off my boy’s back. 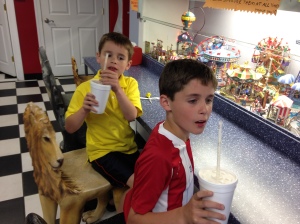 7 thoughts on “At long last…Milkshake”