A woman came down to the little reception room.

“Here are your tickets.”

“OH! Thank you. Is Jonathan coming down? We’d like to thank him.”

“No, he has things to take care of. He asked me to give these to you.”

“OK, thanks a bunch. So the gates open in about an hour, right?”

“Oh, you don’t have to wait. Just go down that hallway and they’ll scan you in.”

I grabbed the tickets, turned down the hallway, headed to the turnstile…Nothin’. There was no one there. So we walked through. We took a left, headed down the concrete corridor. Two security guys came around the bend.

“Excuse me,” I said, holding up our press credentials. “We’re trying to find the field.”

“Just head back that way and take the narrow hallway to the left.”

We walked that way. Quickly. Down the hallway, a turn, another turn. I could see the sky as I looked up. Another turn.

We were in the stands behind home plate. A few steps away was a gate with a security guard in front of it. We walked up and I before I even held up our passes, he opened the door. 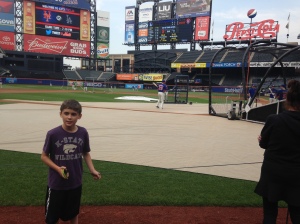 Utter insanity. We were on Citi Field. Not in Citi Field – on Citi Field. David Wright and David Murphy were 10 feet away taking batting practice. Curtis Granderson was stretching over to the left, not 20 feet away. Holy moly mackerel flaming shitballs. It was Mets, a security guard, and us.

Oh wait…there was one other person. Check this lady out: 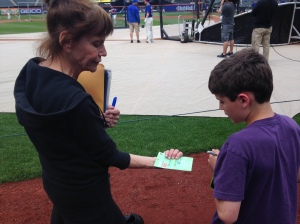 Baseball mutant, grade A. She knew the security guards and had a thick folder full of player photos.

“Did you bring a Sharpie?” she asked Jack.

She was collecting autographs, and was a pro. She immediately glommed onto Jack to form a perfect symbiotic relationship. See, here’s the deal:

Creepy Autograph Lady knew when the yell and where to stand, but she wasn’t cute. Ballplayers don’t have to come over to sign when she calls to them. But when a cute kid calls them…that’s a lot tougher to blow off. Together she and Jack made a brilliant team.

Jack hit the Jackpot. He got David Wright (Mets marquis 3rd baseman). He got Curtis Granderson (former Yankee, just signed for 4 years/60 million). He got a solid 8 Mets players to sign his glove. They even gave him one of the balls. It was awesome.

Then the Mets cleared out.

And then the Dodgers come out for batting practice.

I got talking with an intern who told me he had never seen a team sign so many autographs or a kid get so many signatures. He suggested we keep the ball to pay for college. Look at this thing:

For 90 minutes in total we watched batting practice from just steps away. Beyond the autographs was just the majesty of what we were seeing. I remember seeing Hanley Ramirez hit shot after shot. There was the whack of the bat and then silence as the ball went on and on and on. It would go so far you literally couldn’t hear it as it bounced around in the black part of center field. It made me think of watching ski-jumping. You just can’t believe how long they’re in the air and a little piece of your heart is in the air the whole time with them.

Imagine being at the driving range with Tiger Woods watching him drill balls. Or sitting with Van Halen while they tune up their guitars before a concert.

We walked out slowly and in a bit of a daze. Then Alex broke the silence.

Next (and final) post coming tomorrow. Here are a select few Alex photos:

“That’s David Wright and Jack and the lady.”

“Jack and two big Mets. Jack’s throwing the ball in the air.” 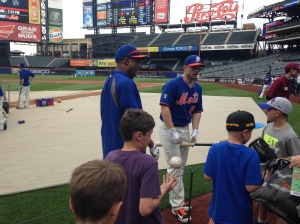 “Jack and the fast guy.”

“This guy put his glove on his head to sign autographs.” [Dad note: that’s Clayton Kershaw]

“Jack is practicing his pitching. I got lots of these.”

“Dodgers starting to stretch.” [Dad note: guy with the beard is Brian Wilson. Him and Bobby Abreu were the only players to ignore the kids. Creepy Autograph Lady said they were both hard to get to sign.]