…I met Tom 6 years ago at a cub scout camping trip. Our boys were both 5.

The trip was hell. Boys were running like maniacs through the dark with flaming sticks. They kept going to the food table, opening sugar packets, drinking them, and flinging the wrappers into the fire. At one point a boy had a knife out and was spinning around with his eyes closed yelling “stay out of my blood circle!”.

It was the most stressful 18 hours of my life. I felt like a hockey goalie working for 8 straight games without pause. I returned home and Shani asked me: “Did you an Tom get to know each other?”

“No!” I screamed. “We were too busy protecting our kids from death. The other dads were all drinking beer out of red cups and doing nothing.”

…I met Jon when we both joined a group of guys for a running club. We were both well in the back and ran together. His son, also Jon, was on a soccer team with Jack the next year.

…I met Bob… Actually, I don’t know where I met Bob. But his son, Max, and Jack have become really good friends. Max is a “caller” – which means he calls other kids to initiate getting together. Jack is also a “caller”, and has been deliriously happy to have a friend calling him. Not to mention, he and Max have this terrific bond of imagination and sports. I think they’re really good for each other.

This park is entirely unremarkable. It has trees and birds and trails. But other than that it is altogether nondescript. It’s baffling how uninteresting I find this park. This is our second time coming here (see Rambler post); last time we went for a hike and turned around mostly because it was so boring.

But to these boys – boys of the suburbs…there are sticks, and salamanders under rocks, a creek, and open woods to run and run. There is a dirt road at the campsite to play wiffle ball and throw a football and pee. And while it may seem terrible to trade their screens and TVs for these boring woods, those boys were off to the races.

They got up at 5:45 on Saturday and did not stop going until they crashed at 10 pm. First they spent two hours planning for a kids vs dads wiffle ball game, including line ups, warm up runs, and chanting at various parts of the woods. Then we played the actual game. Then a hike. Then salamander catching and terrarium building. They played Hunger Games for 3 hours. They played lacrosse “Indian style” out in the thick wood. They built a fortress out of stacked sticks and piled stones. Their shins and forearms were slashed with dozens of scrapes and cuts and not one of them even noticed.

Take away the screens and not only do they not slow down, they speed up. Let their imagination go beyond the 9×6 inch dimensions of an iPad and they absolutely soar into the stratosphere.

As for the Dads I was with, here’s what worked.

I have officially sworn of small talk. Suburban dadhood for me is filled with parties where you talk about nothing. For over a year I have refused. I actually streaked a party two years ago just because it was so boring.

So to be able to sit around a campfire and have a solid 10 minutes of silence go by is much appreciated by me. We had some fun times talking, don’t get me wrong, but we didn’t fill the blank spaces with jibber-jabber.

2)    Everyone pitched in without being asked

Each of us took a turn at dishes, but it wasn’t a turn. We just did them because they were there. Same went for firewood collecting, tents, garbage, and any number of camping chores that are actually the best part of camping in my opinion.

All 4 of us have similar boundaries for our kids. Which means I had full run to yell at their kids and they could yell at my kids. No one felt like an asshole or a wet blanket. To me it felt like I had three other trusted sets of eyes on my kids.

And as a final note, and for no logical reason to this post…I bring you the crapper. 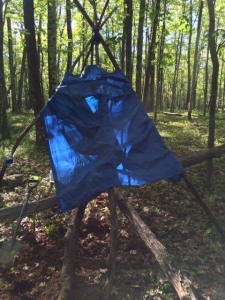 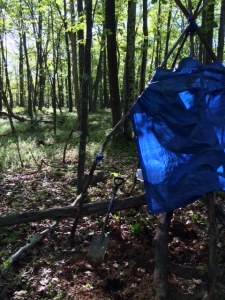 This was a glorious marvel of engineering. We dug a deep hole and framed up logs to suspend yourself over it. We even built a teepee structure over it and hung a tarp as a curtain for privacy. The fact that the tarp only shielded the view of the pooping person from the waist up, leaving naked legs and feet completely exposed, made this structure all the more glorious.

And that’s the end of the post. I’m ending on the crapper.

Well…I suppose I can give you a few photos. This is the fort they built:

This is a shot of the boys. Note the strange crap they are carrying. Alex has a pot with a snake in it and has a knife around his waist. In truth, I absolutely love this shot.