Alex had a soccer game this weekend, and I happened to notice something on the sidelines. Check these two photos out.

Here are the dads from my town: 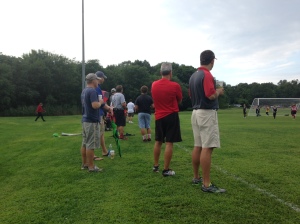 Here are the dads from a nearby town: 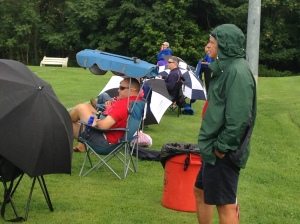 Look closely. Look at the difference in the clothes, the postures, the expressions.

Which dads do you think are discussing skills their 9-year-olds need to work on? Which dads are talking about coaching philosophy and team strategy? Which dads are taking mental notes of pointers to provide their kids after the game?

Which dads are having more fun watching the game?

Which dads yell things like: “Cross it! You need to find the open man!” Which yell: “Nice job!” and “Good try!”

I don’t name the town I live in on the blog, but it’s a town full of wealthy white people. Dads are lawyers and investment bankers. And truth be told, I don’t often feel like I fit in that well. Interestingly enough, I found myself on the midfield line, exactly between the two groups.

On one hand, I’m an unconditional rooter. I love watching Alex hop around out there. I sit during the game and I don’t watch as if I’m a paid consultant. I don’t wear athletic gear to watch soccer as if they’re going to call me in to play forward. I do not own a visor.

Yet on the other hand, there is a deep and irresistible competitive asshole in my heart. I squirm as Alex fails to go after the ball. I want to yell: “Don’t just stand there and watch the ball roll after you kick it! You’re not playing golf!” And while I never yell that, I will yell things like: “Keep pushing forward, boys!” and “Get tough on defense!” as if it was a video game and I could control the kid/players with my voice.

I will make a final comment about the town from photo #2. That is the town where “psycho coach” is from. This coach dropped the F-bomb at Jack in a baseball game and later challenged our coach to fight in the parking lot. I wrote and award-winning blog post about this incident.

The coach was reprimanded by the league but not removed as a coach. But in response to this, several parents from that town threatened to pull their kids from the league if the coach was not removed. The guy stepped down. So while they’re chill on the sidelines, they stand up when it really counts.

*Important note: the post won no award. I made that up.

1 thought on “A Tale of Two Sidelines”