So let’s start with the tickets. They cost me $288 each. A lot of people have asked and half-asked me, so I figured I’d get that up front. I forked over $576 for Jack and I to go see Derek Jeter’s last game at Yankee (plus the cost of a quart of ice cream for Alex).

The forecast called for rain. 100%. There were no playoff implications, which meant if the game was cancelled they would not reschedule. The Yankees website said that I would receive credit for the face value of the tickets ($32).

But the baseball gods favor us. Time and again they have rewarded us with remarkable gifts of fortune. So at 1:00, Jack and I hopped in the car and headed for New York. Derek Jeter’s final game.

We have it down. We park in our old neighborhood (Washington Heights), which is right at the GW Bridge. From there we take the subway to the Bronx. By 3:45 we were outside the stadium in a bigass line of people, all of whom were being soaked in rain. At 4:00 they let us in.

Now, we know what we’re doing. We know how to get autographs and where to stand for balls. And MAN was Jack hoping for an autograph, but this was a rough situation. Pouring rain meant no batting practice and there were loads of fans. It was bleak and it was pouring. Here are shots of my intensely patient son trying to get a ball.

After an hour I finally convinced him to give up so we could get some food.

So – apologies to a lot of people – but Jack is by FAR my favorite person to go to a ballgame with. He reveres the game more than anyone I know. Inside a baseball stadium he carries a gravity about him of awe and appreciation. More than anyone I know he is aware that every game he attends is a dip into the flow of baseball’s tremendous history. It’s as if half of him is there with you and the other half lifts up and leaves his body. He is so intensely in the moment.

Here are some shots from his first baseball game. Look at his face: 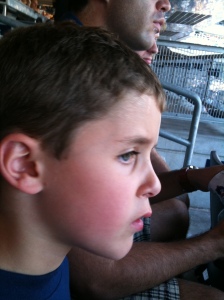 Now here are shots from the Jeter game.

Look at the boy. You can see how aware he is of everything. God, it’s incredible to be around him.

On top of that, he watches the game. Real baseball fans understand that. Like a laser he is locked in on every pitch, every routine out, every shift in position by the outfielders.

And finally, everyone at the game around him adores him. It always starts with people saying things like:

“Hey, little man – someday you’ll appreciate this. Remember these games with your dad.”

People think he’s cute. But then they begin to overhear Jack say things like:

“Nelson Cruz is gonna get some MVP votes, but I actually think Altuve has a shot.”

In truth, it’s starting to feel less like taking my son to a ballgame and more like going to a game with a buddy. I honestly found myself wishing I could get him a beer.

Anyhow, at 6:30 we headed up to our seats, the ground crew pulled off the tarp, the 100% chance of rain became nothing but blue sky, and Derek Jeter’s final Yankee game was on.

The big, expected Jeter moments came. When he first took the field. His first at-bat – and then when he hit a double. The place was screaming from minute one. Again and again the crowd chanted:

But it’s baseball, right? You can only keep that up for so long. After the 1st inning it was tied 2-2 and from there the crowd toned down the Jetering to sit through 6 scoreless, well-played innings.

In the 7th, who else?, Derek Jeter knocked in 2 runs and at the end of the inning the Yanks were up 5-2. Two innings left to send Jete off with a win.

The Yanks took the field in the top of the 8th, and to me, this was the most emotional inning. The chanting all game had been loud and joyous, but now it was different. It came in a deeper tone and it was twice as loud. It was the bleachers leading it and it was a roar. Everyone seemed to realize that this was it. The end. This was Derek Jeter’s next to last inning at shortstop in Yankee Stadium. And you could see it getting to Derek. From way the hell up I could see him fighting off tears. You could feel him realizing what was happening and you could feel how grateful he was to all the fans yelling his name.

Here – check out this clip if you want. It’s the whole inning.

All the fanfare after the game is all over the news, and it was tremendous, but for my money this was the biggest goodbye moment. It’s certainly the most overlooked.

So into the 9th inning we go. Robertson on to close out the 5-2 victory – and the son-of-a-bitch gave up 2 home runs to let the O’s tie it up. Damnit!

The overwhelming emotions: anger and annoyance. I mean, here we are in a meaningless game, we’re all ready for that final easy out so we can get on with the Captain’s last moment at short. It was the perfect emotional ending that we were all there for. We were ready to cry and cheer together – and stupid Robertson screwed it up. 5-5. Tie game.

It was Jack, ever aware of the batting order, who said: “This is good, we get to see Jeter bat one last time.”

It happened so fast. Bottom of the 9th, tie game. Pirela slashed a single. Gardner bunted him over to 2nd. Jeter up and…

That moment was like a crazy revivalist meeting where the Holy Spirit swoops over the congregation and everyone falls down in fits of convulsions and speaking in tongues. You know when you blow up a paper bag and then pop it? My chest was just like that. Someone popped it and noise exploded out of me – I have no idea what kind of noise it was; I may have been cackling.

Walk off, Jeter. What was about to be a tearful farewell turned into a jubilant celebration. Joe Girardi’s plan was to have Jeter lap the entire stadium and when he got back to home plate, there would be his former teammates (Posada, Petite, Rivera) to embrace him and they would walk down the dugout stairs together, bringing him into retirement. But the baseball gods had other plans.

The team poured onto the field. Jeter’s ex-teammates came out. He leaped for joy. Everyone howled and screamed. Jack and I both tore off our hats and flung them onto the field.

We walked out (finally) trembling and glowing. We took the subway back to the car and away we went. It was hard to believe what we’d just seen.

At some point on the Turnpike, I said to Jack:

“You think we’ll stay friends? Not all teenagers like their dads.”

You can’t really hug someone in the front seat of a car, but Jack pushed his head into my shoulder and said:

Lest you think we have this perfect father-son thing going, it should be noted that halfway home, Jack had a level-3 shitfit because I would not pull over at a rest stop.

Apparently, if you buy your son Skittles, a hot dog, a giant soda, peanuts, and pretzel, and $288 tickets to Derek Jeter’s last game – all of that is worthless if you don’t pull over at 11:45 and buy him a pack of Combos.

He shrieked at me for a solid 15 minutes. Then he passed out asleep.

Alex opted for a can of whipped cream instead of a quart of ice cream.

Here are some photos from the game: 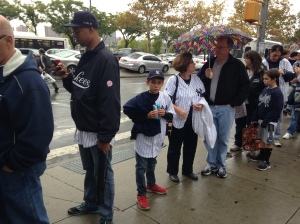 In front of the stadium. 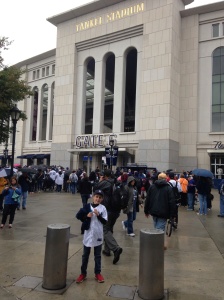 Jack and his $6 mega-Mt. Dew in commemorative Jeter cup. 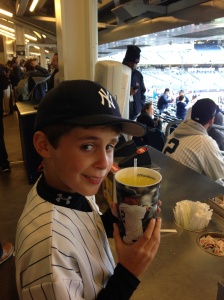 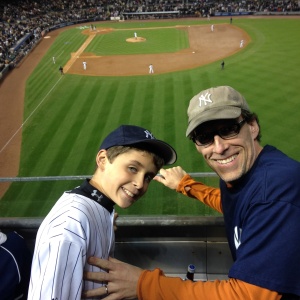 After the game. (Note about my idiotic clothing. In preparation for the rain, I wore my camping clothes. It was great for cold/rain. It looked ludicrous. As we were getting into the car to leave for the game, my neighbor walked by and in all seriousness asked me: “Are you going hunting?”)

These videos are basically unwatchable, but the sound is pretty cool.