I asked Alex what he wanted to do for his birthday.

“I want to go camping with Hal.”

I have a group of friends from high school. There’s 8 of us and every other year we go away for a week together and act like morons. We call ourselves “The Ramblers”. We’ve all been tight since we were kids, and we get together to ramble whenever we can. Hal is part of that group.

“With Hal,” he repeated.

I don’t know why this was Alex’s wish. I think he hears me tell stories about camping trips with these guys, and Hal is always a big part of those stories. I suspect Alex wanted to join in the fun.

So I called up Hal.

Before I go any further, I should describe Hal. Hal is humongous. He is 6 foot 7 and weighs over 300 pounds. But it’s not just his physical size; Hal’s personality is just as huge. He’s got a heart the size of a watermelon and he dives into everything 110%. He falls in love, starts businesses, embarks on careers…he’s one of the most vibrant people I’ve ever known.

Oh, he is also constantly making noises that sound like a cross between a diesel train engine and an industrial-strength bellows. Lots of huffing and whistling. Ok…time in.

I called up Hal…

“Yeah, well, I went camping last month and the place was full of a bunch of gomers wandering around with their coolers on wheels looking for people to drink beer with. Grraar freep honk HOMINA-HEE.”

He was in. Actually, he was thrilled by Alex’s request. But he wanted a good site to camp at. Something isolated, but also reachable by car. I struck gold.

I found the Lackawanna State Forest in Pennsylvania. It was centrally located for all of us, free to camp in, and when I made reservations they actually gave me the combination to a gate that led us down a dirt road to a remote campsite. Fire pit, tent area, picnic table, plenty of wood to collect, and no gomers for miles. The trip was a go. Our friend Skinny and his son, Evan, agreed to join us. Hal decided to bring his 4-year-old nephew, Niko. We were ready for adventure.

Friday night we arrived at the same time as Hal and Niko. We raced to get a fire going, get the tent up, and get the gear unpacked.

When it comes to camping, Hal is a glorious contradiction. He is an expert camper. He can make cowboy coffee over an open fire. He is a skilled fire builder. He knows how to make survival shelters out of tarps and backpacks out of sticks. Yet at the same time, Hal travels with so much survival gear it would be literally impossible for him to get more than a mile into the woods. He is a master of survival bushcraft – provided he’s within a few yards of his truck.

Hal unpacked 2 folding tables, a 10-man tent, saws, axes, stoves, coolers, gear boxes, and a custom 6×3 grating he had made to grill his special chicken over the fire. Hal also brought about five times more food than was necessary. Much of this over-packing came down to one simple reason: Niko.

Hal was terrified to be responsible for his nephew. I’m talking near panic. The burden of keeping this boy alive in the woods for 2 nights led Hal to bring enough food for 20 people.

“Niko HAROOM how about a cheeseburger, buddy?”

“Hot dog? Blueberries? Can I make you a pancake? Yogurt? Double A battery? Homina-HEE!”

It was a delight to watch them together. Giant Hal and this tiny boy. Hal told me they see each other nearly every day, and their closeness was apparent. It was like a grizzly bear and a kitten. The most touching moment of their interaction came Friday night while we were roasting smores.

“I told you you’d had enough marshmallows, buddy.”

This got him right in the heart. Suddenly the Hal bellows/engine seized up. You could hear him gulping for air. After 4 of 5 silent gulps, Hal finally composed himself.

“You’re my best friend too, buddy.”

That night as we got the boys down, Hal covered Niko in three sleeping bags. Hal then opened his 4th sleeping bag up like a giant quilt and laid it over my boys. He then pulled a thin wool blanket over himself and went to sleep.

Next day we were up early for pancakes, coffee, bacon, eggs. Hal had a busy day planned, filled with “bushcraft” workshops. In fact, he’d sent me a list of gear I had to buy for the boys. This list included tarps, ropes, lights, and knives. And I’m not talking about cute little pocket knives. I bought my boys each a knife made in Sweden with a 4-inch blade that was sharp as hell. I did not tell my wife. They arrived in the mail that week and I found myself pulling them out daily, really wondering if I was going hand my 8- and 10-year olds these blades. Hang on…take a look at these things.

Serious right? But before we got down to business, Skinny and Evan arrived.

Time out. Background on Skinny.

First off, Skinny’s nickname is pretty obvious: he’s incredibly Skinny. Not quite so much now, but in his teens he was a stick. His chest was literally concave and he had no butt whatsoever. We’ve been friends since the 4th grade. We made out with the same chick on a choir trip (not at the same time). I was in his wedding party. We’re tight.

Of all of us, Skinny is the one who got married first, bought a house first, had kids first. He’s always shown us the way. Skinny lives life with remarkable simplicity and contentment. It would make the most advanced Buddhist monk envious. He is a creature of pure decency and goodness. He married a woman we all adore, and it is no wonder that his 13-year-old son is a terrific kid.

OK, time in. Back to knives.

Hal’s lessons included carving batons, fire starting, feather stick carving, and splitting wood using your knife. He started off with a lecture that included a warning about keeping your “blood circle” clear, and being certain that you did not cut your femoral artery. Then we turned my boys loose. Check out the photos: 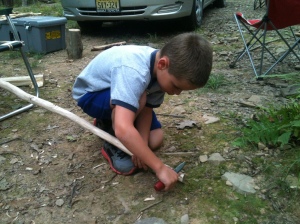 I can report that my boys were 100% perfect with those knives. They handled them without any issue at all. It was remarkable. In truth, the entire day was just idyllic. We did a home run derby. We played football. We dragged firewood out of the forest. We ate hot dogs cooked over the fire. We went for a hike. Just puttering around the campsite – not a video game, TV, or iPad among us – the day absolutely flew.

After a terrific dinner, I found myself sitting at the fire with Evan. At 13, Evan is in 8th grade and in the thick of the social blood letting that is middle school. I asked him about his group of friends. About girls. I asked him how he felt about himself. It was remarkably candid, and Evan was articulate about it all. He was able to exactly describe the social strata of his school.

“Right where we were,” Hal said, joining the conversation. Soon everyone was in the discussion. We compared Evan’s experiences to what me, Hal, and Skinny went through. We talked about kids we hated and kids who were mean. Evan described a group of 8th graders who terrorized him last year. We told him about bullies we had all contended with in our day. Skinny, in typical fashion, boiled it down to a principal he repeats to Evan often:

“It’s nice to be important. But it’s important to be nice.”

It made me think about how that time of my life. It was rocky. But then it occurred to me what I came away with…

The kids went to bed and the 3 of us found ourselves around the fire. It was so dark you literally couldn’t see each other. Just voices in the darkness around the fire. It would occasionally rain in tiny 30-second bursts. We’d shiver from the tiny drops and skootch closer to the warm fire pit. We were drinking cans of Utica Club beer, a shitty upstate-NY brand that tastes like ice-water until it hits the very back of your tongue. All our respective boys were asleep in tents nearby. Middle of goddam nowhere, we were hanging out like we’ve done more times that I can count.

I somehow managed to come out of junior high with a group of friends who I can only describe as a miracle. And there we were more than 30 years later, easing our own boys into that time of their lives…together.

Here are a few more photos from the weekend:

Alex practicing firestarting with some gadget of Hal’s. Note that the knife is right next to him. As soon as I gave Alex his knife, he took it everywhere, including the bathroom. 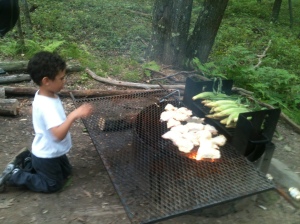 Hal grilling up an amazing dinner.

Four boys around the fire.