Hard to believe – but the fall season of baseball has begun. Jack has joined up and this year will be playing with 5th graders (his age) and 6th graders. The quest to get a hit begins again – but this time the competition is tougher. Older, faster pitchers.

Jack was assigned a coach we didn’t know at all. Two guys with 6th grade kids who have coached as a team for years. They emailed me to ask about Jack. I told them:

So first practice I went to pick Jack up. I was a little early and Jack was actually coming up to bat. First pitch comes in…BOOM! He corks it into the outfield. The coach came running over to me soon thereafter:

“I worked with him in the cages – he’s WAY better than I thought he was going to be. He WILL hit this season. I can tell. I know it.”

The coach then went through the entire draft with me and he was glowing about some “steals” he got in the late innings. I think he included Jack as one of his late-round steals.

In other news…the boys have discovered the song: “The Devil Went Down to Georgia” by the Charlie Daniels Band. It has immediately become their top request. Today they played it 6 times in a row. Alex sat on the bed and listened to the words. Jack was in the hall air-fiddling like he was being attacked by a swarm of bees. 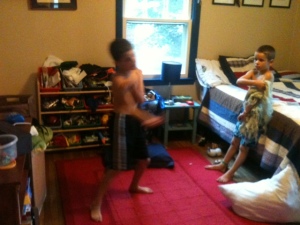 The appeal of this song is universal and undeniable. And air-fiddling is mandatory. I like it way more that than unbearably catchy “Psy”, dreaded Korean hip hop artist.

Sidenote: My brother Chris was once in a crowded bar when Devil Went Down to Georgia came on. Chris kicked into such a frantic fit of air-fiddling that someone actually threw a glass pitcher at his head. The pitcher hit his friend Mike Ondik, who was sent to the ER.