The sun was shining and one of the dads had brought donuts and a Box O’ Joe. It could not have been better. The grass was just a little wet and the kids were passing the balls around. God, I was so happy to be sitting on those metal bleachers watching the game.

Jack got up on the first inning and surprised me by taking three bold swipes at the ball. His swings were gorgeous, but still he struck out on three pitches. I took this as a good sign, though.

However, his second at bat he was back to his old ways. He was way back in the batter’s box and leaning out as the pitcher began his throw. He struck out again, but this time on called strikes.

But above all, the baseball as a whole was WAY better. The past two years have been dreadful long games. Kid pitch has been filled with walks, passed balls, unchecked steals, and bobbling defense. But now we’re dealing with 10-13 year olds and they’re making plays. A routine grounder was actually a routine out.

Baseball is finally back. To sit there and watch my son – and to watch the other kids I know. Pure joy.

That was Saturday morning, and then Alex and I jumped in the car. 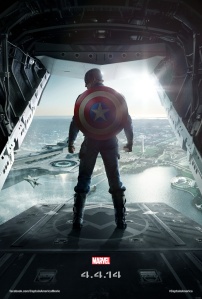 In 1993, when the Michael Keaton Batman movie came out, me and my friends from high school camped out at the Oakdale Mall for the premiere. We even got on the news; my friend Hal was listed as “Hal McCabe, Batfan”.

Fast forward 21 years and we’ve kept up the tradition. Alex and I met u[ with my friends Hal, Scott, Chief, Skinny and Skinny’s son, Evan for a gathering/reunion to celebrate this superhero event. The theater in Vestal has the best seats in the known universe (see photo) and were the perfect place to enjoy the living shit out of that movie. 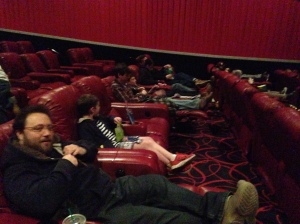 Afterwards we all went to Consul’s Pizza to break down the details of the film. A congress of literary professors gathering to discuss the novels of James Joyce could not be more insightful.

“Now I know that last shot is Quicksilver and Scarlet Witch, but who is…”

“I thought so! And the scepter stone will eventually become part of the Infinity Gauntlet. Right!”

“When the Hydra computer is targeting people all over the world, did anyone happen to notice any relevant names?”

These are The Ramblers. These are my friends from high school. We’ve been in each other’s weddings; we are godfathers to each other’s kids. Not a week goes by when I don’t speak to one of them and not an hour goes by when some quip is not exchanged on Facebook.

We’ve shared hundreds of adventures and millions of laughs. This gathering for Captain America means another joke added to our collective jokebook. A new story added to the list we tell and retell each other. Another quote added to our lexicon.

Every other year is a “Rambler Year”, which means that is a year we will go away together for a week of adventure. I’m meeting up with Spider to run a race together in May. The first words out of Hal’s mouth when he saw Alex was to confirm that we’re all going camping together in September. And then we have our movie gatherings…

“So we’ll get together for Guardians of the Galaxy in August, but then we have to wait until next summer for Age of Ultron?”

They are how I tell time.

My father is a peculiar man. Play him in bridge and you face one of the top 100 players in the country. Play him at poker and he is entirely readable. When he bluffs, everyone at the table calls him. When he has cards, everyone folds.

Yet for all my Dad’s quirkiness, he is terrific with my kids. Once when Alex was a baby, I left him with my dad. Alex was sound asleep, and I figured he would stay that way. But half an hour later I returned to find that Alex had woken up screaming as soon as I left.

“I found this binky, stuck it in, and it seems OK now.”

Alex’s tiny body was sound asleep across my father’s big belly. My father was calmly watching golf like nothing was any different.

After Captain America we spent the night at my Dad’s place (with his wife, “Grandma Mary”). The four of us played Stone Age that evening and two games of Dominion the next morning. We had a great time.

And then, The Journey

Different genetic characteristics are more common in different countries. Italians have dark complexions. Irish are fair and often red-headed. Sometimes I think there is a road gene that is more common in American DNA. I have this gene and so does my wife. It has most assuredly been passed to my sons.

It was three and a half hours each way to get to Vestal. I drove feeling like I couldn’t wait to get there, but at the same time feeling like I wished the trip would never end. I had that effortless efficiency of my hands on the wheel, adjusting the radio, gliding among lanes, everything in a seamless flow. In this state any music is perfect, but I had Bruce Springsteen’s Tunnel of Love on and the lyrics and melody were perfectly in sync with my mood. The pucker of coffee on my tongue and the joy at feeling the weight of my coffee cup and knowing it is still ¾ full. Road rapture.

Alex is a terrific traveling companion. He put on Katy Perry. It’s so funny to listen to him sing along with lyrics he doesn’t understand at all.

Let’s go all the way tonight
No regrets, just love
We can dance, until we die
You and I, will be young forever

Alex can make you look like father of the year (“Harry Potter 6 is my favorite book, but I also liked the Percy Jackson books. I read them in a week.”), but he can also make you look like someone should call Social Services (“Why are you wearing shorts!? It’s snowing out. And doesn’t your father make you wear a coat?”)

He is a creature of extremes. He will eat virtually nothing at most meals and then sit down and eat an entire carton of ice cream. He would watch Phineas and Ferb for 20 hours straight if we let him. He’ll practice diving in the summer for 6 hours at a time.

But the boy can roadtrip for sure. It was so special having him to myself for the weekend. He was glowing from our time alone as well.

About an hour from home he was singing along with another Katy Perry song that he didn’t get. This one about a sappy teenage romance.

I was sneaking peeks of him in the mirror and smirking. Then the little shit looked me right in the eyes and sang: “I will love YOU unconditionally” with extra emphasis on the “you”.

On cue, I got choked up. Guess he understands the lyrics better than I thought. 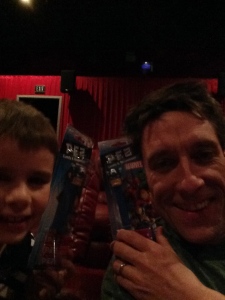 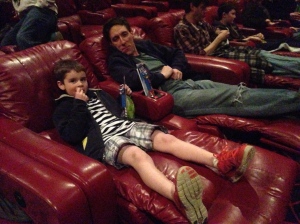 6 thoughts on “Three Destinations and a Journey”