I have 3, count ’em, 3 baseball updates to share with you. All are heart-warming in their own way. Let’s start with…

I got together for lunch with my friend Randy this week. Over burgers we had ourselves a good ol’ fashioned baseball bitchfest. Both of us have sons in little league and it was a wonderful hour of swapping stories and affirming for each other what mature, well-balanced sports dads we are as opposed to all those maladjusted dads our sons are surrounded by. Aren’t we the best? Well, we think so too.

In all seriousness, we talked about keeping it in perspective, about times our sons had been the hero and the goat, and about how goddamned expensive baseball equipment is. We also swapped horror stories of deeply misbehaved kids and parents. I can’t write the stories I know from my town (and I’ve got some doosies). Half the people who read this blog live in my town and even if I didn’t name names, they’d figure it out for sure. So it was fun as hell to tell these stories to Randy.

Randy had some good ones too, one in particular that I love.

Randy was coaching a game and there was a play where the baserunner and infielder got tangled up on the basepath. The runner was called out. The opposing coach (we’ll call him Coach Asshead) got into it with the umpire something fierce. After finally losing the argument, Coach Asshead stormed back to the dugout and said to his kids:

“All right then, from now on we’re running over anyone in the basepaths.”

Randy went right after him.

“I heard that. Did you just tell your kids to run over my kids? What kind of thing is that to tell those boys?”

“You…you misheard me. I didn’t say that,” Asshead grumbled back.

“I didn’t mishear you. I heard you just fine. Now here’s what you’re going to do. You’re going to go into that dugout and tell your team you were wrong.”

Coach Asshead muttered as he walked away, and then under Randy’s glaring eye, Asshead went into his dugout and told his kids not to run down the opposition after all.

Is Randy a real man or what? Warms my heart, indeed.

It was about midway through the season that Jack was benched for 3 out of the 6 innings. Being on the bench 2 innings and in the field for the other 4 was the norm, and Jack noticed the demotion.

I wrote his coach (Gary) a carefully worded email:

Not sure if you we aware, but Jack’s been on the bench for 3 innings the last 2 games. If you think that’s right, then I’m 100% behind your decision. You’re the coach. But if you weren’t aware, I wanted to let you know. Jack takes pride in being a good fielder and he leans on that a lot since he knows he’s not hitting well.

Gary caught up with me at the next game.

“Thanks for letting me know. I didn’t realize I had done that. Look, I know you don’t know me well, but I’m all about these kids havin’ a good time. I don’t want anybody on the bench more than 2 innings. I’m sorry.”

In truth, I knew Gary was going to be cool about it. I knew from his demeanor in games and from the way he treated Jack in the batting cages. I also knew because of Gary’s son.

Gary’s son is our best player. He’s hit a homer in nearly every game and once he hit three. He’s our best pitcher and an excellent catcher.

But beyond that, Gary’s son is also out best teammate. He is constantly encouraging and pushing the other kids on the team. He’s the leader. Jack pitched an inning in our last regular season game, and Jack hasn’t pitched in 2 years. Gary’s son was the catcher and he provided a constant stream of confident affirmation that guided Jack through.

I see a kid behave like that and I feel damn good about his dad being my kind of coach.

So this week was the final elimination game and we were losing 12-8. It was our last inning and we were down to our last out. The batter swung and got whacked in the thumb with the ball. After some tears, the kid toughed it out and then hit a grounder to end the season.

Teams shook hands; dugouts were emptied for the next team. As the kids were shuffling out, the head umpire for the league happened to be going by. In seconds a swarm of our kids and parents were accosting him.

“It hit him in the thumb! That’s hit by pitch! He should have taken first base, right? Right?”

They were disputing our last out in an indignant mob.

Coach Gary marched in with a big smile and declared: “You know why he was out? Because the ump said so. Now shoo!”

In my opinion, that was the RIGHT ANSWER to teach these boys.

So big thanks to Coach Gary. We lucked out this season.

Final tale, and this is quick. The playoffs are over for Jack’s team – however they are by no means over for Jack.

The prime spot is the scoring booth where you can watch from the window above home plate. Jack has even managed to run the scoreboard a few times, which has been an occasion for exquisite pride.

This Saturday, Jack got up and was at the field by 9 AM for the first game. Then he and his friend Max stayed for the next game. He called up for lunch money and to re-up on sunscreen* around 11:30. I handed him a five dollar bill and he turned and headed back towards the field.

“How many games after this one?” I called out.

He he held up 2 fingers and kept walking. All day that boy was going to be at that field.

AND FINALLY…While it felt great to write about baseball, I will make the obligatory pitch for our iPAd app: Kid Dad Fun. Click this image and it will take you to the download screen.** 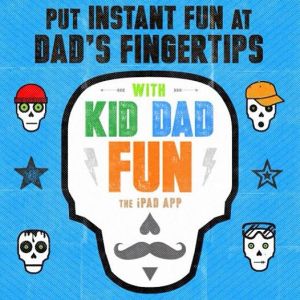 *Point of dispute: the call for sunscreen. I was out running an errand when Shani called to say: “Jack called for money and sunscreen. Can you swing by the field?” But I knew the truth. Jack called for money; Shani was the force behind the sun screen. Or so I thought. I called Shani on this later. “No,” she said, “he called and he was the one who asked money and he said he needed to re-up on sunscreen.”

Now that is a boy who knows how to work his momma.