I remember a comedian talking about how easy it must be to be a weatherman in Sand Diego.

“Today’s weather? Nice. Tomorrow? Nice. And then next week? Nice.”

I was there for the weekend and everyone kept marveling at how nice it was outside. Every time I stepped outside someone would say, “God, it’s gorgeous out here.” It was sunny, low 70s, no humidity.

I had meetings through Sunday at 11:30. Then I hustled up to my room, changed into shorts and a T-shirt, and made it out to the front of the hotel as a faded black pickup truck rattled in. This was my cousin Max to pick me up so we could head to Petco Park: Padres vs Dodgers.

Full stop to the narrative…Some background on Max. [And a note of apology – this background will be too long unless you’re a family member.]

I knew Max mostly when he was a kid. When I was 22 I moved to LA and lived with my Uncle Coddy, Aunt Mary, and their two sons (Max and Sam). I spent 6 months living there and I consider it an immersive pre-training parenthood camp for me. Max was 7 at the time.

To say Max has grown up would be an understatement.

Max is huge. His head is huge. His shoulders are broad. His torso is massive. He somehow carries a bigness to him that’s hard to explain. I remember looking over at his arm as we drove. It’s not muscular like a weightlifter and it’s not flabby either – it’s just big. Several times in the course of the afternoon when we stood up from our seats I was shocked that Max wasn’t a foot taller that me. He seems like he should be 6’9”. If we’d blown a flat I feel like Max would have simply gone to the rear bumper and lifted the truck up while I changed the tire. He wouldn’t groan with effort or call attention to it. He might laugh about it if you said something. But then he’d set the truck back down once the spare tire was on and climb back into the vehicle.

To go along with the hard-to-define bigness of Max there is a hard-to-define gentle quality about him as well. He’s one of those rare people who listen to every word you say during a conversation. He leans in and nods as you speak. It felt like the simple updates I was giving him about Shani and the boys were precious to him and he would hold them with care in his humongous hands.

As Max and I headed towards the ball park, the first thing we did was try and nail down when we’d last seen each other. In fact, no one in my extended family has seen Max for years. Fact is, he’d been sucked away by a girl.

It was his first long-term relationship. She had anxiety disorder and a messed-up family situation. You can see how Max, with all his patience and soft kindness, got sucked in. You can see how her anxiety attacks before a family reunion meant Max stayed to care for her and sadly let us all know he wouldn’t make it after all. You know this story.

In March they broke up. They have only spoken twice since then – and that was only about logistics of misplaced boxes. That chapter is over. Now Max is headed to Ireland in July to bum around for a month. He even has a layover in NYC and is staying with us for a few days to hang out with my boys. We’re going to drive out together and see my brother and his family. You can see the life return to my cousin, yes?

PHEW! Forgive the long exposition, but family members who read this blog will delight in this update about our Max. And suffice it to say, I was thrilled he was making the drive down from LA to go to the game with me.

Here is a map of the area around Petco Park: 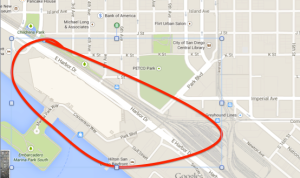 The area I circled is the convention center with hotels and restaurants and corporate rich people that can come over and enjoy a game in the nice San Diego weather. However…here’s where we parked:

The area I have circled in this image is the area we walked through to get to the park. It was absolutely teeming with homeless people. I’m not talking about a few panhandlers, either. Under the bridges and on the sidewalks along chain link fences there are rows and rows of tents and cardboard shelters. I snapped a few photos. 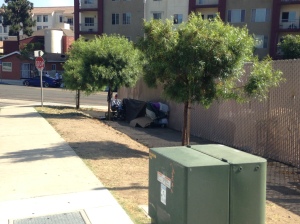 I was stunned. I suppose homeless people recognize the nice weather as well as anyone else does. Nonetheless, we scored street parking right near the entrance ramp back onto the freeway. We were set. Six blocks later we had walked to Petco Park.

So here’s Petco from the outside. I thought it was an art museum until I saw the sign. And I’ll tell you, the area outside the field was amazing. It was unlike any park I’ve ever been to. There are raised walkways, hanging gardens, and terrace bars. I’ve never had so much fun just getting to my seats. Check out the photos: 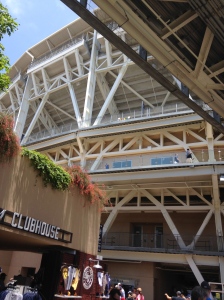 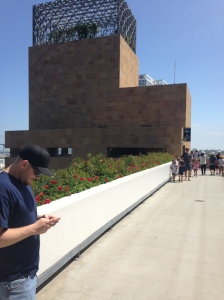 We made our way to our seats just just before the first pitch with Hodad’s burgers and cups of good beer in hand. We had cheap seats, but still we had a great view of the field. Here’s our view: 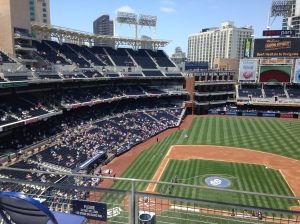 In plenty of parks (Blue Jays, Yanks, Phillies), the view from the cheap seats is substandard. At Petco you can see everything. Max and I sat back in the sun, and instead of watching the game with my normal laser focus, I started jawin’ with my cousin. We talked about the break up with his girl. He told me about his plans to go back to school. I told him all about Shani and the boys. There’s nothing like a ballgame for men to have leisurely conversation. If we’d sat in a living room for three hours it would have been some effort to talk one-on-one for all that time. But at that ballpark, time moved along like it was a cool stream that Max and I were dangling our feet into. And I’m embarrassed to admit it, because normally I’m aware of every ball and strike, but I found myself saying: “What inning is it?” 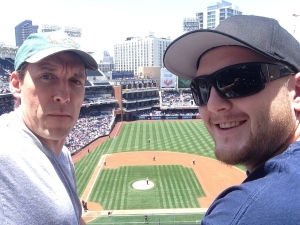 In the 3rd inning we headed out to get another round. Right outside our seats was the Stone Brewing Company Bar. If you’re into microbrews you know how special that is. And here came my next baseball sin. Standard protocol for me is to grab beers and get back to my seat as quickly as I can. But here’s this patio bar with seats overlooking the city, two knockout bartenders serving Stone “Petco Park” IPA. Well hell, how could we not sit down and enjoy our beers at the bar and watch the game on the flatscreen. I know it’s sacrilege, but look at this place. That’s it up on the right with the palm trees.

Max and I wandered over there to see if we could watch some of the game from one of the decks. Not surprisingly, it was reserved for private parties, but they let us take a few photos and then we went and sat in right field for the rest of the game. 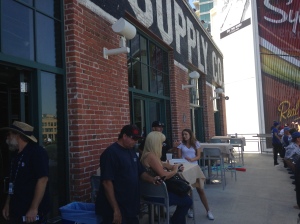 Official NuckolBall recap of the game? This is actually a bit shameful to report.

In the first two innings when the Dodgers were batting it seemed to take forever. They got men on base, walked, stole, hustled, and brought in 2 runs. Conversely, the Padres went down in what seemed like minutes.

Then we went to the Stone Brewery Bar and I could barely see the flatscreen with all the sun — so I missed a few innings.

The middle innings were even and steady. Well-executed groundouts, good pitching, a nice diving stop-and-flip from the Padre shortstop. No runs on either side.

Then we left to explore the terrace. When we finally got seated again I was shocked to find it was the top of the 9th. The Padre catcher threw out a Dodger baserunner with a gorgeous throw and suddenly the crowd was up and the game seemed winnable for San Diego. Just 2 runs.

But it was not to be. The Dodgers are heavy with talent and their closer put the Padres down 1-2-3.

Official NuckolBall review of Petco Park? I’ll say the area outside the actual field is unlike any other park and it is utterly gorgeous. Plus it has the best beer I’ve ever had at a ballpark (which is appropriate for San Diego). But the field itself? I guess I’ll say it’s like the weather in San Diego: “nice”.

It’s funny, I was jotting down the ballgames I’ve been to in the last 5 years and for each and every game I know who went with me. I didn’t have to wrack my brain to come up with it either. Pete, Julio, Patrick, and Reef were with me at the Giants game. With Matt at Dodger Stadium. With Hal for the Rockies. I can name ’em all; it’s an inherent part of each experience.

So with that said, I could not be happier to have gone to Petco Park with my lost cousin Max. 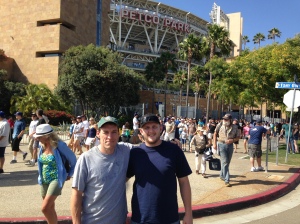 Note there are two Grade A baseball mutants behind us.