We begin…with stress. At work, we were launching a new product and the big launch meeting was in Orlando this week. Our client was a flaming ball of stress heading up to the meeting, which led to some seriously uncomfortable phone calls over the weekend where she used the word “disappointed” a lot.

But the launch meeting went off beautifully. She was getting praised left and right. Tuesday night she apologized to me and my co-worker, Tony (or at least as much as a client ever apologizes). We had known that a Tampa Bay game was a possibility, but up until then we thought we’d be in high-stress meeting mode. But suddenly the weight was coming off our shoulders…next thing we knew we were in the car wearing shorts and headed for a baseball game.

There are 4 people I know who love baseball more than I do:

Tony is a real-deal, haunted, Philadelphia sports fan. Sports are part of the boy’s core makeup. You know how some kids have manners drilled into them and it stays with them for life? Kids in Philly are taught sports that way.

Which leads me to…

There’s a big moment going to a new park when you first see the stadium. You come around a corner and spot it. Or in this case, you see it from the highway. It was a big white bubble with a slanted roof. Here’s a shot Tony took from the car:

We found $10 parking, scored $19 tickets in the 4th row in left field, and learned it was $2 hot dog night. Then in we went. Check out this video…

I’ll confess, I expected Tropicana Field to suck. But as we walked in and looked around, I thought it looked pretty cool. It was a dome stadium, which made it feel small. It had incredible access to the field and any seat was close to the action.

But that wore off quick. Here’s what’s wrong with Tropicana Field:

It doesn’t seem like real baseball. When guys run for a fly ball, something seems off. Scuff marks on their pants seem odd – it’s not real dirt, why should it stain their pants? Plus it look absolutely awful. Check out the photo, the surface looks like a worn out, greasy sweater. 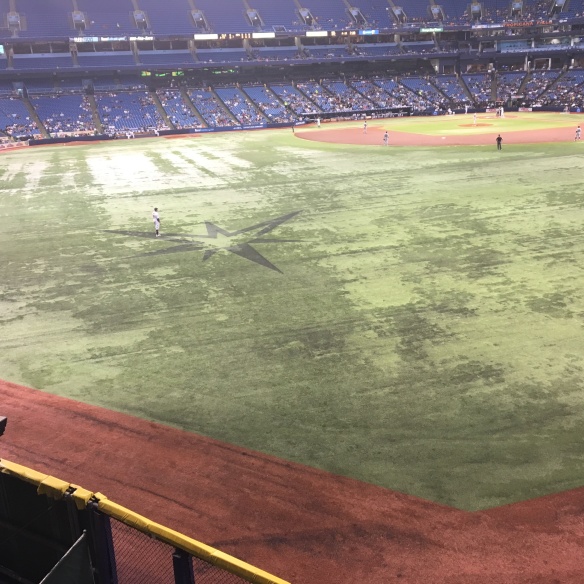 Modern ballparks are designed so you can get to the concessions without leaving the action. At the Trop, you descend into a blue cavern that is completely cut off from the field. Parts of it felt like the Philadelphia Airport (worst, most claustrophic airport in the country). Parts felt like the halls of a hospital.

My living room has higher ceilings.

This way to radiology.

The Rays have no logo, no marquis player, no real history to speak of, no fans. They have the color blue. That seems to be their entire identity. Every damn thing was blue.

Maybe it was the roof, or the lighting, or the turf, or the lack of people in the stands, but it didn’t feel like a major league baseball game. The place was completely, freakishly devoid of any atmosphere whatsoever. There were no crowd noises, just a weird murmur. The sound of the ball and bat were muffled and off. It felt like a trade show being held at the local college arena. Everyone was sitting around waiting for the college team to finish up their practice before we could start setting up our folding tables.

But there were some good things. Parking was easy. It’s a great place to get a ball. Tony introduced me to “The Game” and then promptly lost $11 to me (I will not explain The Game). Actually…the best part was getting to go with Tony. Tony is a fan who sees more things than I do, was excited about stuff I didn’t know to be excited about, and was generally even more comfortable in a ballpark than I am. It was a real treat to go with him. 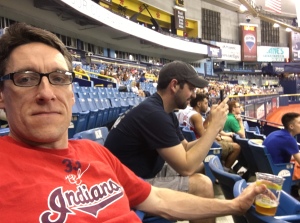 To conclude, Tampa Bay was my 18th park, and it has taken over the bottom spot of my rankings. It’s even worse than the dreadful Rogers Center in Toronto. But still, as we drove off on 275 headed back to Orlando, Tony and I were jabbering away, happy as a pair of songbirds. Even the worst ballpark in the country is still cause of celebration and joy.