I wrote my kids and my wife each a letter this year as a Christmas gift. Here’s the letter to Jack. It’s germaine to the blog…

My son Jack is a baseball fan. He goes on Google Maps and scrolls from city to city searching for satellite views of the baseball stadiums. His birthday party was spent at a Trenton Thunder game. His Christmas and birthday wish lists are dominated by jersey and cap requests. He plays in baseball leagues and then is regularly found alone in our front yard deep in the drama of a baseball game in his imagination.

This summer we took a family roadtrip that took us from New Jersey to Arkansas and back with loads of great stops in between. We hit Hershey Park, Cleveland, Memphis. And of course we went to a Cardinals game in St. Louis. But that may not have been the most memorable baseball game of the trip.

In Arkansas we went to see the Arkansas Naturals play. We ate hot dogs and the strange sasquatch mascot signed my boys’ hats. We sat right above the home dugout and at the end of the 6th inning the catcher came in and rolled a real game ball across the aluminum dugout roof that went right into my kids hands. It was unbelievable.

At the end of the game we went around near the side of the dugout and my boys hung over the railing that the players passed as they left the field. The Naturals had lost so the players did not stop to autograph balls for any of the kids standing there. But as their cleanup hitter, Carlo Testa, walked grouchily by, he stopped. And suddenly the thick wooden knob of a bat appeared right in front of Jack. Jack froze and then looked back at me.

Still not able to believe it was real, Jack lifted the bat. The thing was massive and had been split from Carlo’s groundout at the end of the game. The bat weighed a ton and was sticky with pine tar.

“Can I call Mom?” Jack sheepishly said to me as we walked for the car.

It was 11:00 and his mother was asleep. We decided to wait and tell her in the morning – which turned out to mean that at 5:45 AM we found Jack at Shani’s bedside trying to hold back a smile.

However, his grandmother was awake the previous night. And when we got home Jack loudly told her all that had happened.

“We got the bat. And these three balls. And the mascot signed out hats.” Then he proclaimed: “It doesn’t get any better than that, Grandma.”

When Jack was born, we lived in an apartment in Washington Heights. Having my first child was exhausting. I was getting no sleep due to this tiny reddish creature. And not only that, every action surrounding the child (feeding, changing diapers, holding him) I did with the intensity of deactivating a bomb. I was frazzled and fried.

Mothers bond quickly with babies because they nurse. Moms have the food. So when Jack cried I usually couldn’t help. Jack wanted his mom. I felt a little left out.

Then one evening, when Jack was about 6 weeks old, I was sitting on the couch with him in my arms. Jack was scrawny and wearing a yellow onesie. He had spiky black hair and pupils so huge it made his eyes look nearly black.

I looked down at him, stuck my tongue out, and went: “Blah!”

Jack looked into my eyes. Until that moment he had never done that. They say when a baby looks into your eyes they see your soul. It felt that way. We suddenly had eye contact. He knew I was there. And he opened his mouth.

“Aaaa,” he responded. Tears were now pouring down my face.

I know how it feels to love. But at that moment it was like God took the sun out of the sky and stuffed it into my chest. In fact, it is part of the reason I believe in God. The love you feel for your kids is too huge. It’s too big and mighty to be generated by a person. Only something with divine power could create a love like that. The sun cannot fit in your chest, but there it was in mine.

I think of that moment quite a lot. And as I watch Jack growing up, time and again that massive sun glows inside me. And it glows just the same for Jack’s brother, Alex. Now there are TWO suns in my chest.

And when I think of that night after the baseball game in Arkansas, it occurs to me that Jack himself summed it all up perfectly:

“It doesn’t get any better than that.” 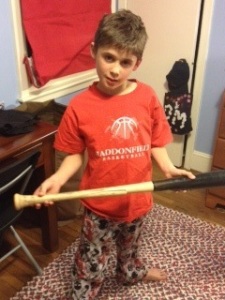 4 thoughts on “X-Mas Letter to Jack”