This Saturday, Jack set his regular alarm and two iPhone alarms (his phone and my phone) for 3:45 AM. After he was up, he slipped into my room and woke me up. We stumbled downstairs, got under 3 blankets on the couch and put the TV on.

For those of you who don’t know, Major League Baseball sent the Dodgers and the Diamondbacks to Austrailia to play the first 2 games of the 2014 season at the Sydney Cricket Grounds. It’s a week before baseball season starts proper, but these are real games; they count. It’s the start of the season, and it’s why Jack and I were awake.

After a 30 minute rain delay (egads!) and a solid 25 minutes of announcing each player individually, at 5:01 AM EST, Wade Miley threw a fastball past Yasiel Puig for a called strike.

Clayton Kershaw was pitching for the Dodgers and he is currently the best pitcher on the planet. His pitching is an opera, a ballet, a sonnet, a Jimi Hendrix guitar solo.

Justin Verlander, ace pitcher of the Detriot Tigers, is baseball pornography. He can throw a curveball that will be headed right at the batters head and then with 5 feet to go it makes a 90 degree turn and slams downwards across the center of the strike zone. He threw such a pitch in the playoffs last year and I literally leapt out of my seat at what I’d just witnessed. Verlander throws 98 mph fastballs until the 8th inning at 104 pitches when he actually dials it up to 101. To watch the proportions, the stamina, the sheer might of Justin Verlander is vicarious and sensational.

Which do I prefer, Jenna Jameson or Angelina Jolie? In truth, I wouldn’t mind a game 1 of the World Series that lets them perform opposite one another.

And I’ll tell ya’, it sure was fun watching Kershaw at 5 AM. At least for the first 2 inning before I fell asleep. Jack, of course, watched every second.

Around 9 that morning I started getting breakfast working.

He was in the dining room digging into his baseball bag. 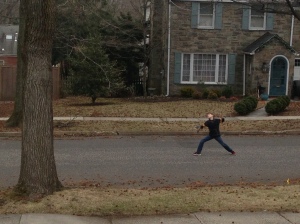