I am currently at 887 followers/facebook fans. Huge thanks to old friend, Bill McCarthy, who is posting relentlessy on Facebook for me. 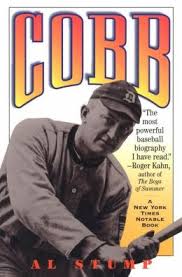 The book is called Cobb, by Al Stump. The movie with Tommy Lee Jones is actually about the writer trying to write this book. Here’s the low down.

Ty Cobb was insane. Not “crazy” in the fun way we talk about athletes. “That wide receiver is crazy! He’ll jump up and catch the ball even though he knows he’s gonna get hit!”

Ty Cobb should have been in a mental hospital. He was like the nutcase that it takes 6 cops to arrest. Everyone hated him, he hated everyone and everything, and somehow that all got channeled into baseball.

Next time you get into a baseball conversation, here are some terrific stories you can tell about Ty Cobb:

1)    When the author went to Ty Cobb’s house to start writing this book, Ty Cobb was living in a house in California with no power. Cobb was not poor. In fact, Cobb was a millionaire (not because of baseball, but because he was a genius at the stock market). The house had no power because 2 years prior, Cobb thought the power company had billed him $9 extra. After a nasty dispute, Cobb refused to give them another cent and had lived in darkness since.

2)    As an old man, Ty Cobb carried a duffle bag with him wherever he went. Inside the bag was a million dollars in cash and a gun, which he would frequently pull on people (including the book’s author).

3)    One morning when Cobb was a baseball player and the Tigers were on the road, Ty Cobb was attacked by three men. Cobb had a gun on him but it misfired. Cobb was stabbed three times, including a knife wound in the back near his kidneys. Cobb proceeded to fight so ferociously that the men (with knives) fled. Cobb then chased down the guy with the knife and beat the man to death with the butt of his gun. But wait…

From there, Cobb went to the ballpark and hit 3 for 4 including a triple.

Then…Cobb went to the hospital.

4)    One time a pitcher hit Cobb on purpose. (Most pitchers knew better.) Cobb took his base. Next time up, Cobb laid a short bunt down the first base line. The pitcher ran to field it and Cobb literally ran over the man. Gouged the holy hell out of the pitcher with Cobb’s sharpened spikes. Left the pitcher lying in the base path, bleeding all over.

5)    Cobb was the player/manager once when his team was facing Babe Ruth. Cobb’s pitcher threw Babe a strike. Cobb is in the outfield and starts ranting at his pitcher: “You idiot, did you miss the sign? We’re walking Ruth intentionally! Now walk him, you idiot!”

Babe steps back, expecting to be walked. Pitcher throws another strike.

Cobb goes ballistic. Comes charging all the way from the outfield. Swearing and screaming at his pitcher. Calling him all kinds of names for missing the sign to walk Babe Ruth. (Everyone thought this was pretty funny, especially Babe.)

Finally, Cobb goes back to the outfield, Ruth steps up, expecting the intentional ball.

In comes strike three. It was all a set up.

This is a fun book. It does a nice job telling the story of one of the most interesting people to ever play baseball.

8 thoughts on “Ty Cobb Stories You Can Tell at Parties”